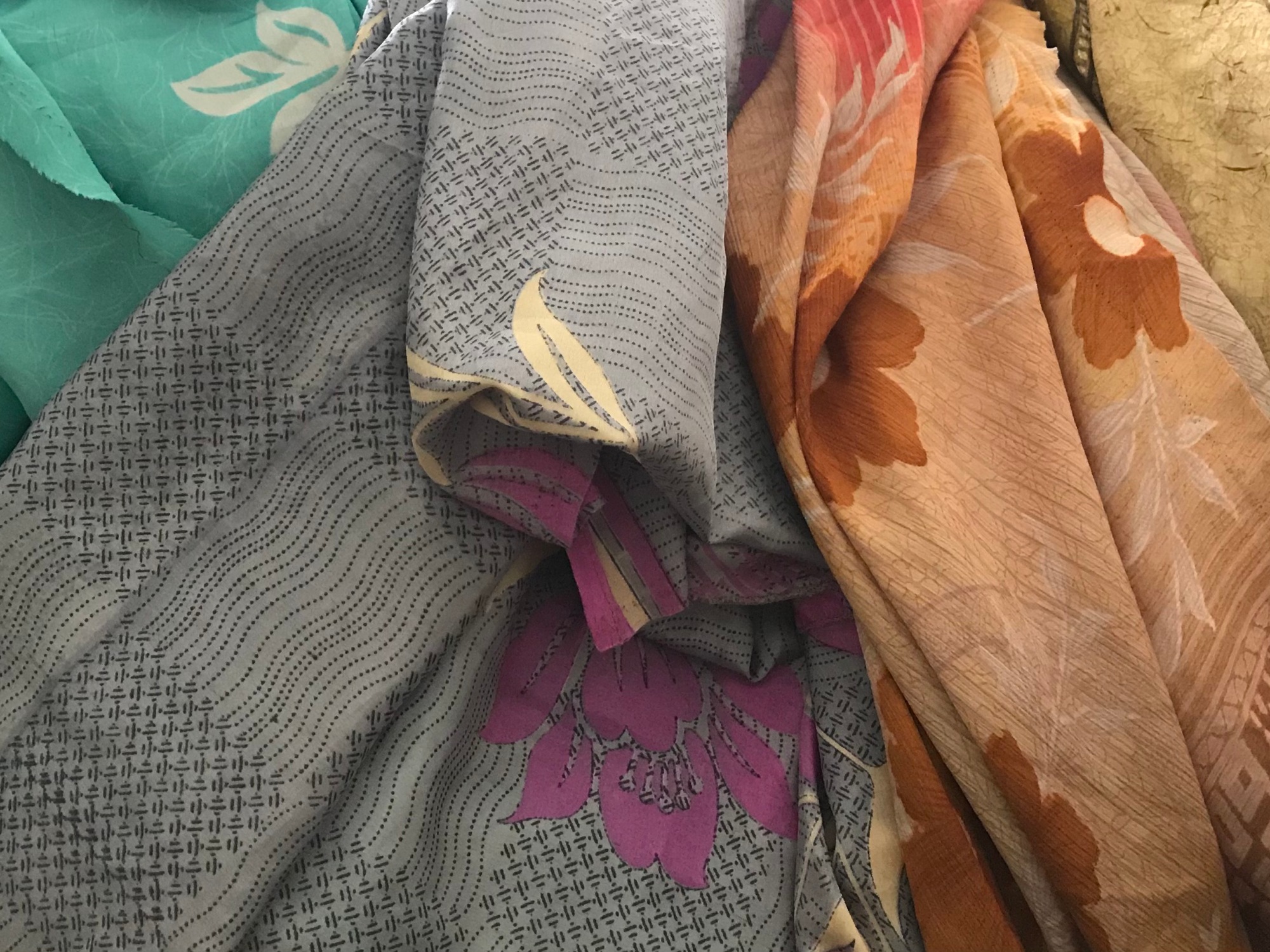 And what might that be I hear you say?

Bear with me, this is not a knitting design post, but more of a documentation of a little project I have been working on for the last couple of days.

Some of you may have heard of a company called Darn Good Yarn, not only do they sell some lovely, ethical yarn, but they also sell skirts. These skirts are made in India and Nepal from recycled Sari material that would otherwise end up in landfill, by a workforce that are paid a fair wage and in many cases are women who live in vulnerable circumstances.

A year or so ago I purchase one of their lucky dip skirt packs and duly received 3 ankle length double layer garments. One I loved straight away, the two were a bit of a struggle. individually I loved all four layers, just not in the pairings as they were currently constructed. I constantly found myself putting them to the back of my wardrobe and eventually realised I was going to have to either pass them on or do something about it.

This was my problem. Olive greens and sand do not really gel with turquoise and lilac in my book and steely blues and purples together with sandy oranges and reds do not do each other justice. BUT if I was to separate them out and put the browns together and the blues/ turquoises together…..

I got the idea of a Frankenskirt from the Facebook group for Darn Good Yarns and once I really got thinking about it I couldn’t put it away.

So yesterday evening out came the stitch ripper and I chipped away at the waistbands of the skirts to separate everything out.

A couple of hours later I had a wonderful pile of slippery silky materials – gulp!

Having separated them out, it quickly came clear that the layers I wanted to put together … were the same length so I was going to have to shorten one of each pair in order to maintain the layered look.

Easier said than done. I had read on the Facebook group that it was better to shorten a skirt from the top end rather than have to re hem what is a considerable diameter of skirt. Now this makes sense, HOWEVER.. These skirts are cut on the bias which means if you cut fabric from the top you are going to finish up with one layer considerably wider than the other (as I found out to my chagrin) when I tried to marry up the two . – Pi r squared and all that jazz.

So to get over that I ran a gathering thread through the wider layer and very gently gathered it to match the narrower long layer – I only had to ease in about 10 inches over a couple of metres, so it is not so much a gather as a redistribution of width. I then tacked the two layers together and then pinned and tacked the waistband back onto the blue/turquoise skirt. The sandy coloured skirt was another kettle of fish.

The other waistband was blue to match the shorter layer of the original skirt and to be honest just wouldn’t do. Luckily I have a little bit of a fabric stash and I happened to have a small length of evening fabric with a similar weight and feel in a similar colour, that I was able to cut up to make a new waistband. So that also got duly pinned and tacked into position. Why pin AND tack? Well to be honest these fabrics are very light, floaty, very slippery and have a mind of their own. it may have taken me all night, but by the end of the day I had two skirts that just needed the waistbands re sewn, which I intended to do by machine to match the rest of the sewing on the garments.

You would think that sewing the waistbands back on when tacked to within an inch of their lives would be simple. Umm no!

I managed to catch the underlying layer of the skirt into the waistband on more than one occasion causing much cursing and unpicking and re sewing. Thank goodness for the tacking, if the damned things had only been pinned they would have been in timeout by now.

Still these are the results

This is the sandy layers , which were both the longer layers so this is still an ankle length skirt. The layers are different enough not to be matchy matchy, but similar enough that they don’t grate on my colour nerves 😉

The we have the Turquoise/blue combo. This is now shorter, not that much, about mid calf length. Again not matchy matchy, but so much better – I love that turquoise layer – it looks so much better without olive green and sand poking out from underneath

Would I do it again – probably, but if I did I think I would shorten from the bottom. By the time I had cut, basted, gathered and pinned the top of the skirt I could easily have trimmed the bottom and re hemmed it, but we live and learn.

These skirts will now get much more wear and will feature in my work wardrobe.