Well I already seem to be struggling for titles 😉

The test knit is moving on, though I did have to tink back a row and a half ( about 300 sts) when I realised after knitting my way through an early morning flight , that I had set up one of the charts incorrectly in Knit Companion and was trying to knit the wrong chart in the wrong place – no wonder the pattern didn’t seem right!

After a couple of cups of coffee and a day in London learning about all the new ideas in Tech for Education I spent the train journey back to the airport and the waiting time for the flight getting myself back to where I started – sigh! So much for using my travelling time to get ahead.

Now I am not very superstitious ( hence the title) but I am hoping that nothing else will go wrong with this test knit, I am nearly at the end of what I have charted and it looks like I am going to have enough yarn left to do the border that I was hoping for, just need to sit down in a darkened quiet room and try and figure out the transition from the body chart to the border…

In the meantime as I have been working on the test knit exclusively I will have to resort to the time old look back to give you a photo.

This wrap is cleverly designed to flow from one design on the edge into a second stitch pattern through the middle, divided by a few rows of garter st. 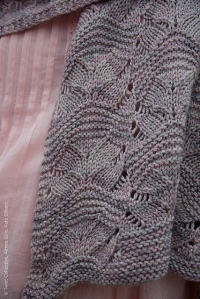 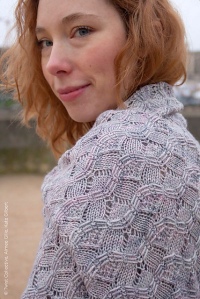 This means that you can knit a second “end” separately and graft (kitchener) the two bits together giving you an invisible join!

The yarn is one of the softest, scrummiest yarns I have ever worked with and I hope to use it to make one for myself whenever I get the time…

If you want to make one for yourself, you can get it here.

Have  good weekend. The weather here is given to be awful, so I will probably be tucked up in my armchair tackling the border on this test knit 😉